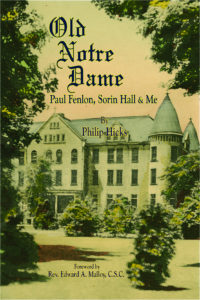 A preview of the book appeared in

Written in the tradition of Tuesdays with Morrie, this memoir chronicles the unlikely friendship between a wide-eyed freshman who takes up residence in Notre Dame’s historic Sorin Hall and the courtly professor who has lived there for six decades. Philip Hicks finds in Paul Fenlon a gold mine of information about Sorin, from the graffiti on its attic rafters right down to the fabled ‘Captain’s Corner’ in its basement. Professor Fenlon is one of the legends of Sorin Hall, a beloved teacher with a “genius for friendship”—the very last in a long line of bachelor professors-in-residence.

Old Notre Dame shows how the professor attempts to live out his days in Sorin despite failing health, rambunctious dorm life, and phantom campus figures who would just as soon see him return to his hometown in Pennsylvania. Fenlon struggles heroically—and sometimes comically—to preserve the bachelor-don tradition, his ironclad routines, and his religious faith in the face of a hostile, 1960s-inspired youth culture.

An entertaining conversationalist, Fenlon brings the history of this great Catholic university to life. Here we meet the students, professors, coaches, and priests who have made Notre Dame such a storied institution: gridiron heroes like Knute Rockne and the Four Horsemen as well as unforgettable local figures like Father John ‘Pop’ Farley and ‘Colonel’ William Hoynes. With anecdotes that are, by turns, funny, touching, and revealing, this quietly inspirational book transports us to a simpler time in the shadow of the Golden Dome.